"Until one has loved an animal, a part of one's soul remains unawakened..."
Anatole France

This drawing challenge is one close to my heart. I was asked to draw my beautiful friend Christine's scruffy pup Cesario (he's the black and tan dog on the right). I was also asked to draw Christine's late puppy Eponine (the cheeky fluff ball on the left) who passed away a year ago on the Friday just gone.

If you have ever loved an animal and shared nights cuddling, or playing or talking, or had an animal lay close to you while tears streamed down your face, or while you sung your lungs out pretending to be a pop star or sat patiently at your side while you ate a meal you will know that nothing compares to this special unconditional love.

And If you have ever lost an animal friend my heart empathises. My friend Christine's world was rocked like never before just over a year ago. Her rock and her best friend were gone in an terrible tragedy. I know she is still healing from this. Her healing is helped with a new little earth angel sent to her in furry form. His name is Cesario. I suspect that Eponine helped Christine find him.  And so this drawing challenge I wanted to show that Eponine and Cesario are a spirit team, loving and supporting their mutual spirit friend Christine (who just happens to be experiencing a human life).

A STORY ABOUT MY FRIEND MISHKA

I lost my beautiful friend and cat companion Mishka about five years ago. When I moved to Melbourne she was one of the first friends I found (at the animal shelter). She was with me when my brother lived with me, then with the next two housemates. Such a great friend. She was feisty, independent, couldn’t be told what to do. She was a free soul. But we had an understanding. She was loyal to me alone. At night time she would push open my bedroom door with her wet little nose and sneak up on my bed and curl around my shoulders and purr like a little motor. Through the night she would often get up and walk onto the bedside table and drink from my glass of water (she only drank water out of glass - clearly she was a classy cat!) I loved hearing her lapping happily at the water in the middle of the night. I ended up having a bottle of water with a lid on for me and a glass for her filled every night!
One day my youngest brother invited me to check out his new apartment on the other side of the city. I bought him a box of house plants to make his apartment feel more homely. As I was leaving I didn’t notice that Mishka had slipped out under my feet through the front door. I would occasionally let her out the front with me when gardening, so she loved the “front” and the adventure that was otherwise off limits when unsupervised.
When I came back home later that night (after dark) I parked the car across the road opposite the house. As I got out of the car Mishka ran over the road to meet me and my partner. I went over to pick her up. But as I was about five metres away, suddenly a car came racing down the street. Mishka got unnerved by the sound of the approaching car. She bolted for our house - the safe zone for her. Unfortunately the direct path from me to the house was right in front of the car.
I watched her go under the wheel. Maybe the worst moment of my life.
I ran to her screaming, the driver stopped, and I held her as she coughed up blood and breathed her last breath. Poor driver didn’t know what was happening. I couldn’t stop crying and screaming out in utter grief.
My housemate Kit at the time was an earth angel in disguise. She went and got Mishkas favourite blanket and wrapped her in it and took her in the house. My partner talked to the driver and assured him it wasn’t his fault. We put Mishkas body in the back yard and lit candles around it. My housemate told me that when a soul leaves a body sometimes it may stay around for a few days, disorientated but at peace, trying to figure out the situation. So the candles would give her a chance to see her body and know that we cared for her. We buried her the next day in the back yard with her favourite toys. I made a photo slide show of all my favourite pictures and let myself bawl my eyes out while watching it back. I lit a candle in the back yard every night for a week in her memory.
I woke up during the first night in tears. The second too. I was pretty inconsolable even with my partner giving me support.
The third night I was alone. The third night is when Mishka visited me.
In the middle of the night I was awakened. But I did not know what by. I heard the door being pushed opened. I heard it and felt it. I felt Mishka walking towards the bed (as I had felt so many times before). I was confused. Wasn’t she gone? I lay on the bed straining my eyes in the blackness looking towards the door. Then I heard it. A lapping. Right next to the bed, right where her water glass was still placed. Then the sound became louder and louder and louder until the whole room seemed to encompass this lapping sound. So I sat up. And then my eyes adjusted. I was alone in the room. But I walked to the front door (right next to my bedroom door) and opened it to witness the Melbourne rain falling on the plants in the front garden. And I knew suddenly. Not believed, not hoped, but knew. Mishka had become the rain. The rain, and the soil, and the plants, and the earth. And for that matter, the sky and the stars and the rocks and the trees and ocean and everything in between. And she was fine. Absolutely fine. And she wanted to let me know.
My grieving stopped that night. Because she told me she was fine.
I still missed her, and occasionally would shed a tear but in my heart I knew all was ok. My friend was greater than just her physical form that she left.
This is a true story. I have never had an experience like it before. But it was as real as the sunrise in the morning.
I am now blessed to share my life with a gorgeous cat Ruby who follows me around the house and sleeps curled up in a little ball on my bed at night. She is a constant and true companion and asks not for much except food and cuddles. Ruby reminds me to practice unconditional love daily. I can't thank her enough for that. 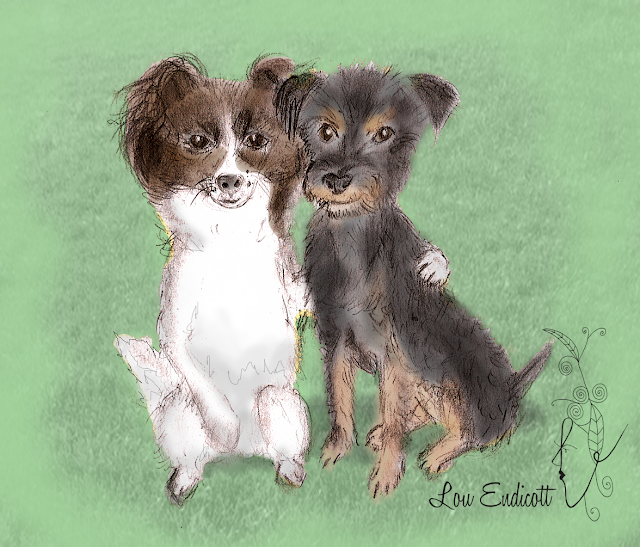